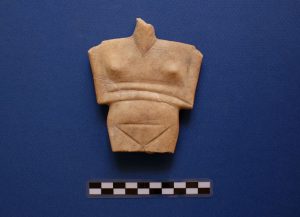 The unexpected discovery of a marble Cycladic figurine at the site of Gkisouri at Nea Styra in the summer of 2008 led to the subsequent excavation of the area that revealed a cluster of three EH II graves. The excavation, which unfortunately remains incomplete due to a lack of funding, brought to light only one of the three graves.

This paper presents the preliminary results based on the study of the first tomb. The differences exhibited between the trapezoidal plan of the grave and those of the published examples of the same period, combined with the large number of skeletons and the richness of the grave goods, show stylistic influences from the Cycladic civilization, and therefore need further investigation.

The discovery of these three graves confirms our theory for the presence of a significant EH coastal site, which until recently was based solely on surface surveys and incidental findings. In this context, we attempt to assess the role of the settlement. Its geographically strategic position, on the sea route along the Euboean Gulf, adds to the list of sites developed along both the Euboean and mainland coast during the Early Bronze Age.