Rescue work and archaeological research at Kleitos, Kozani: the Neolithic settlement through space and time. The diachronic use of the site (in Greek) 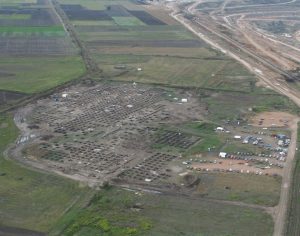 The archaeological site at Kleitos is situated in the basin of Kitrini Limni (Yellow Lake), in a short distance from the town of Kozani. It was inhabited from the second half of the 6th millennium until the 2nd millennium BC, and then again during historical times. From 2006 until 2010 a rescue excavation took place at the site in advance of expansion of the lignite mine operated by DEI (Public Power Corporation). The excavation covered 7.5 hectares and has brought to light two Neolithic settlements (“Kleitos 1” and “Kleitos 2”), remains from the Bronze Age Period, late Roman burials, a stone building of historical date as well as a number of movable finds dating from the Hellenistic till the early Byzantine Period.

“Kleitos 1” is a flat, sparsely built settlement and covers an area of 2 hectares. It is bounded by a system of ditches and wooden enclosures. It was inhabited during the early Late Neolithic Period (second half of the 6th and the beginning of the 5th millennium BC) and has been almost completely excavated. Ten large rectangular buildings have been revealed. They had been constructed using a wooden framework coated with clay. The walls, which had been founded in trenches, were coated with plaster and had grooved and painted decoration. Inside the buildings clay-built installations were designed for the purposes of food preparation and storage, and tools and pots were also found. These buildings were destroyed by fire and none of them preserve more than three construction phases.

Between the buildings and around the complex large storage jars, refuse pits and at least 30 structures have been revealed. Most of them are circular and their floor is made of clay and pebbles, with its top surface coated with clay and burnt in many places. A pit-well has also been excavated with a number of intact pots and pieces of waterlogged wood laid at its bottom. Sixteen Neolithic burials have been uncovered, consisting of inhumations and one cremation inside a pot. They are single burials, except one double burial of an adult with a child.

The settlement “Kleitos 2” is located less than 100 m away. It covers an area of 0.25 hectares and has up to three building phases. It was inhabited mainly in the late Late and Final Neolithic Period. It has a more compact form, limited open spaces and post-framed buildings, with clay-built structures and storage pots in their interior. Four buildings have been excavated, whose structure consisted of wooden frameworks coated with clay; their walls had been founded in trenches. Inside and outside the settlement’s boundaries fourteen burials have come to light, most of which were secondary cremation burials placed inside pots.

From the Middle Bronze Age a curving ditch has been preserved with large quantities of pottery together with a deposit containing a similar context. In addition a pit was found with remains of a ritual activity. A settlement of the Middle Bronze Age Period hasn’t been found, but it is possible that it has been damaged by later activities in the area.